What is different about Sourdough bread? Beginner’s guide.

Sourdough bread, what is this actually? Why is it so popular? Why do some claim it would be better for your gut? How come that even people who have gluten intolerance could enjoy the sourdough bread? These and some other questions I am asking myself ever since I have started mastering the baking of this bread. So, I will try to answer these in this article. 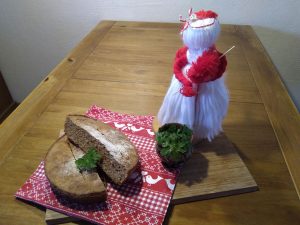 Do you remember the times when you were a child? On weekends when you woke up you could smell the freshly baked bread, or pastry, or pancakes hovering all over the place. The whole house was filled with the warm aroma coming out from the kitchen. It was tickling your nose and tempting you to get up and with your eyes still closed go and follow this delicious smell. My mother loves to cook, so she did spoil us on the weekends:-)

I do love to cook too and love to explore and learn new things.

So, some time ago I have heard about the sourdough bread wonder. That it would be healthy and very tasty too. And I have decided to give it a try. So, first I tried to make the so-called bread starter. 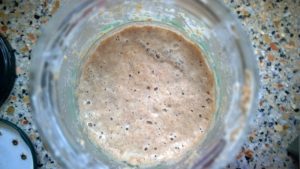 I did follow the instructions on the internet (thank you Google!) and me and my kids, we even gave it a name. Yes, yes, it is a living thing, something like your very own pet. We have called our starter Felix:-)

But, after all the efforts, Felix got covered with mold, blah. And he landed into the garbage bin.

So, my first acquaintance with the bread made of sourdough was not the success I have hoped for. I thought “o.k. I have better things to do” and I forgot about it. 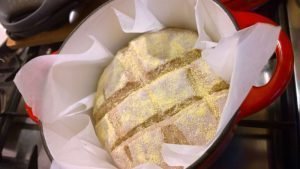 About one year later a friend told me she was baking sourdough bread. And she did explain to me how she does this. “There are a lot of Facebook groups (thank you Facebook!) with enthusiastic bakers where you can learn more,” she said. She gave me some bread to taste too. It was different then the regular bread we are all used to. And it was tasty. My friend gave me some bread starter too. So, no reason to not try again, right? 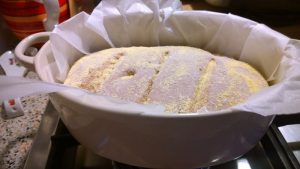 What’s it actually and how is this bread different?

It is called sourdough bread because of the signature tartness when you taste it. It is the same bacteria which gives you that sour face sometimes when you eat yoghurt or sour cream. This is the “thing” that gives it that well-known tangy flavour.

The lactobacilli bacteria is found naturally in wheat flour, along with yeast. It comes to life when flour is mixed with water.

The way the bread is made makes the difference between commercial bread and sourdough bread. First one is made of yeast which reacts with gluten and makes the dough rise. The later is made with a starter- a slurry of water, flour, yeasts and bacteria in it. 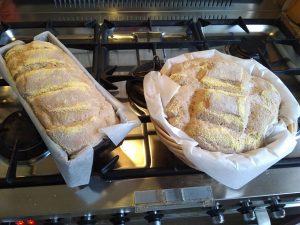 What is sourdough bread made of?

The artisan bread recipe consists of only four ingredients: water,  a starter, flour and salt. So, no milk, no yeast, no oils, no sweeteners. So, how more natural could you get.

Could sourdough bread be the answer to the gluten sensitivity epidemic?

Many people who have a gluten intolerance can still eat sourdough bread. That is because the fermentation process partially breaks down the gluten in the flour. The bacteria also break down some carbohydrates and proteins found in flour. This way it does some predigesting already. When the bread is made with fast-rising yeast is has no time to do any of these things. It should be a 12 hour-plus process for best digestibility. So, the answer here is yes. This bread could be of help to get a grip of your gluten intolerance. 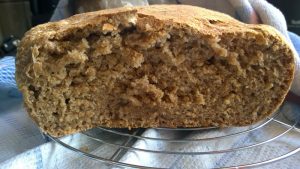 How is sourdough bread fermented and does it have yeast?

This bread is made by the fermentation of dough while using naturally occurring lactobacilli bacteria and yeast in flour. Lactic acid fermentation and alcoholic fermentation occur in this bread.

The first speaks for itself. The second is made with baking soda or baking powder, called “quick bread”. These are something between bread and cake, such as banana bread. Sourdough bread does not contain commercial yeast, but wild yeasts produced during the fermentation process. The last variety, unleavened bread, is the flatbread. 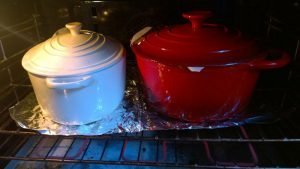 Why is sourdough bread healthier than normal bread? What about its nutritional value?

This bread nutritional value is way better than the nutritional value of the standard loaves. Lactic acids make the vitamins and the minerals in the flour more available to the body. It is easier to digest. It contains no sweeteners or oils. Using live yeast not only gives it the specific tangy flavour, but the bread stays fresh much longer and does not require any preservatives to ward off mold.

One slice of the bread has less sugar and more protein than the regular slice of white bread.

The lactic acid in the bread made with sourdough results in a lower glycemic bread than one made from regular yeast. Compared to regular bread, sourdough bread is converted to blood glucose (sugar) more slowly – so it’s a good choice for anyone managing their blood glucose levels.

So, it can help keep your blood sugar and insulin levels lower and help to prevent insulin resistance and diabetes.

You love bread, right? But, you love fitting your (skinny) jeans too, I guess:-)

So, in this case, bread is not the best food choice. Especially white bread, and especially when it is a lot. But, what about bread made out of sourdough?

Next to its other health benefits, sourdough bread is just like any other bread, when it comes to weight loss. The calories are pretty much the same as in the rest of the bread.  It all depends on the sort of flour it is made of though. So, is it white, whole grain or rye flour determines which weight control benefits you will get. All high in carbohydrates, which can make or break your diet, depending on the type.

Even with sourdough bread, you will have to keep an eye on the quantity when you try to manage your body weight. So, sourdough bread calories are still calories. 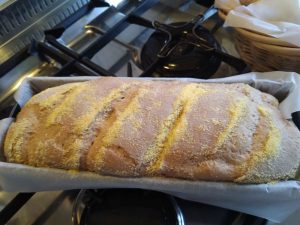 It doesn’t. It becomes dry, but it does not go moldy. I have experimented myself with a piece of bread I left in the bread box. Even after a month it was still mold free. It had become very hard and dry though.

Sourdough loaves of bread are generally more resistant to fungus due to the fermentation process of the sourdough starter.

How to store sourdough bread? Why does it last longer?

The best way to store your freshly baked bread is to wrap it in a piece of cloth (linen, cotton, something else will do too). Best is to keep it outside the fridge. I keep it in a metal breadbox. It will last as long as you need/ want it. It just gets drier after 4 or 5 days. Some people prefer the bread when it is a few days old. This is up to you of course.

Can sourdough bread be frozen and how to freeze it?

At times, you have baked plenty of bread you may wish to save some of it for later. Wait till it has completely cooled down. Ideally, you wait one whole day before freezing the bread. You could slice it or leave the loaf whole if you wish. Wrap it then tightly in aluminium foil or plastic freezer wrap, or put it in a special freezer bag. Put the bread in the freezer. It will maintain its quality for about 3 months. It will be o.k. after this time too, but maybe the taste will not be as fresh.

When you wish to use the bread take it out from the freezer and put into the refrigerator for about 12 hours to thaw. Then remove from the bag or wrapping and store in a burlap bag or a piece of cloth.

How to make sourdough bread and starter?

Well, if we are talking about artisan sourdough bread I would say that it is not that easy in a few lines to explain how you could make such a bread.

“Making a good loaf of sourdough bread feels like striving for the World Cup or an Olympic gold medal.:-)”

It took me in total about one and a half year (with quite a long time out period in between;-) to bake something like it. Let just say that it was edible:-). Then I needed about six months of weekly baking to get the feeling and adjust my baking to the conditions I have, my oven, cookware, etc. And I must say although I still have to reserve some time for baking the bread it has become hustle free for me. Lately, I bake twice a week and we eat only bread made of sourdough at home. The funny thing is if even I buy a regular bread we don’t like it so much anymore.

There is plenty of information on baking your very own sourdough bread out there. Just like this “Beginner’s Guide” or “How to make sourdough” by Jamie Oliver.com

I will share my sourdough bread recipe with you in one of my next articles.

Where could you buy sourdough bread?

And last, but not least the question could you buy sourdough bread in the supermarket?

I don’t know. I haven’t looked into this question, but now when I know the whole procedure I have my doubts.

If you don’t mind that this bread is quite expensive you could do research where you could buy it. The question is still if you could find authentic bread with sourdough? A lot of the so-called “sourdough” bread out there still has some percentage of commercial yeast in it. Because if it’s growing popularity there is also such a thing as fake “sourdough bread”. It is a good idea to be aware of this, especially if you are prepared to pay the price of an artisan sourdough bread, right?

But, you know what, this question I will leave to you to answer:-)

So, I am curious if you could find somewhere to buy the real thing? And that it doesn’t cost a fortune:-) 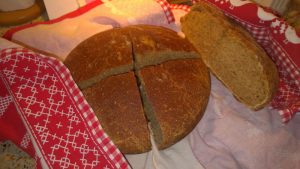 You now made it to the end of this article:-) How do you think, is sourdough bread something for you? It does take some time, some more effort and some skills to prepare, but if it is up to me it is worth it. It is by the way also cheaper than to buy regular bread. Lately, I bake two loaves of bread twice a week and buy it at the grocery store only once in a while.

Maybe you do already have experience baking this bread?

Do you have some tips or maybe I have missed something in this blog post what you would like to know? I would be happy to go even deeper on this subject and answer the questions you might have.

I am Elena, a creative marketing and communication professional. I love to travel and nature. I am interested in and inspired by the Slow Living-way of life.

With GoSlowLiving I want to inspire you and show you how you could balance your daily life.

Do NOT follow this link or you will be banned from the site!